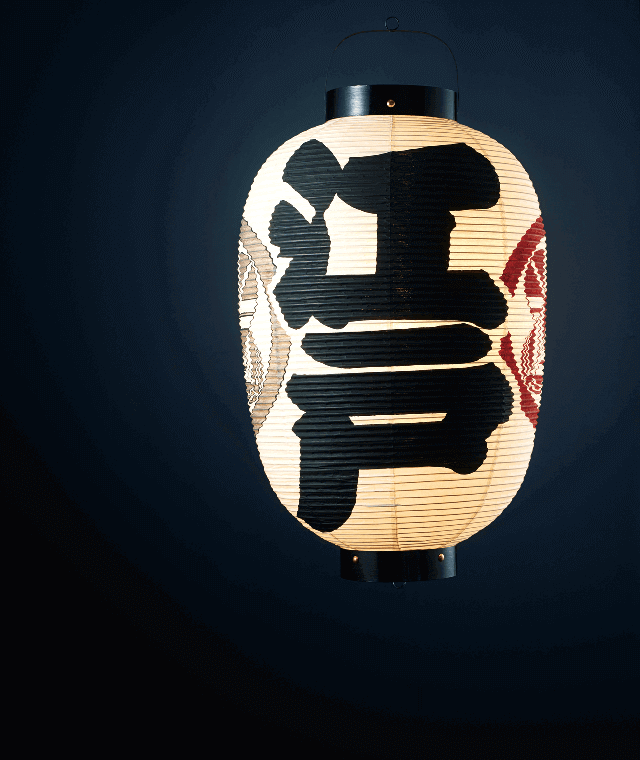 Handwritten textures represent family traditions.
Chochin (lantern) can create warmness in the space, thanks to the candle light coming through paper. Its history goes back to the 16th century. Thereafter, it is said that a prototype of the current shape was created as an expanding and contracting type, made of thin-bamboo round frame pasted with paper. It became popular among ordinary people as indispensable lighting equipment from the 17th to 19th century. Edo TegakiChochin (hand-painted paper lanterns) inherits the traditional methods to draw characters and family crests of that time. Family crest is a pattern to show owner’s genealogy and birth, displayed on the ornaments and arms, which is similar to heraldic emblems used by European nobles and knights. For each family, the detailed orders and rules of drawing are prescribed, but a craftsman can draw any complicated family crest by free hand, and keeps the “Edo patterns Ewith appropriate balance of characters and crests. That high-level technique is applied to new attempts. Recently craftsmen may draw animation characters, logos, or foreigner’s name in phonetic equivalent using Kanji characters. Lanterns are portable when contracted, but have a strong impression when extended. They are good for souvenirs to decorate the room casually when used as an interior accessory or a lampshade.

It is recognized that in the Muromachi Period (1337-1573), the earliest examples of Chochin lanterns were being used at the start of the 16th century during the Bunki Era (1501-1504). The lanterns used then were said to be kago-chochin (lanterns inside bamboo baskets). Prototypes of what would later become the modern collapsible chochin are believed to have been created during the Tenbun Era (1532-1555). During the following Azuchi-Momoyama Period (1573-1596), chochin adopted the form of a skeleton of thin split-bamboo hoops covered by paper. Such lanterns came equipped with a flat base for housing a candle. This design resulted in lanterns that could be expanded and collapsed at will. Chochin use subsequently became widespread during the Edo Period (1603-1868).

From the mid Edo Period onward, a great number of craftsmen skilled in calligraphy and brushwork resided in Edo's Asakusa district. Wholesaling systems were developed in the Meiji Era (1868-1912), this resulted in a growing division of tasks between chochin production processes and character/crest decoration processes. Even today, some Tokyo craftsmen make a living based on writing Japanese characters on finished hibukuro ("fire bag lanterns"). The Japanese characters written on chochin are generally referred to as being in the Edo moji style (the Edo lettering style), and such chochin calligraphers also prepare senjafuda, slips of paper bearing pilgrim names that are affixed to the gates of Shinto shrines and Buddhist temples. Although lettering is written inside an outlined area on senjafuda, chochin lack such restrictions. This leads to a slightly more free-flowing calligraphy style. Furthermore, painting family crests on chochin differs from applying them to kimono, in that the former are painted in black ink on a white background. Crests are painted in a way that facilitates visibility from a distance, and unique methods are utilized to achieve a balanced appearance.