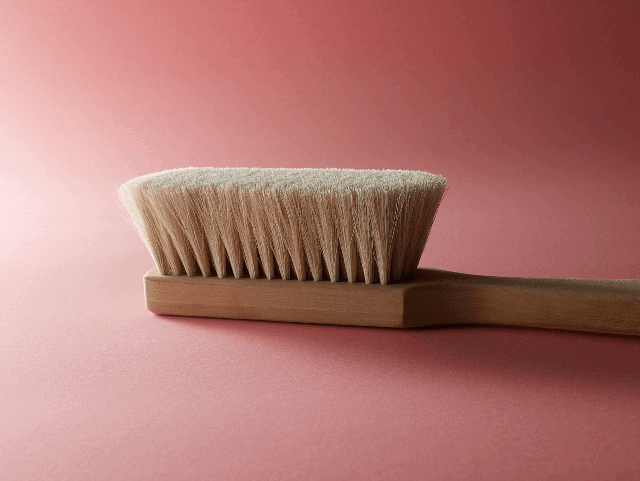 To create that touch, manual works were necessary.
Brushes were introduced from the West along with modernization, and those developed into the wide product lines including Western cloth brush, shoe brush, body brush and others. Even today when most of them are manufactured by machines, Tokyo TeueBurashi (handmade brushes) adopts only manual methods. Animal hair of horses,pigs and others, and plant fibers are used for bristles. The manufacturing process starts from selecting only good hair. The next process of bristle implant is where the craftsmen’s skills at mostly required. The quality of hair varies according to body, rump, and tail, and a craftsman usesthem according to their flexibility and springiness. The next process of manual implant makes a complete difference from machine-made products: acraftsman checks the entire balance of bristles, and picks an appropriate volume of hair with the hand touch to implant them as bristles. The hole density is determined after prototype making is implemented several times. Horsehair cloth brushes can retain the sheen of delicate clothes, such as cashmere and Kimono, giving no damage. The brushescoming into contact with the skinusually usegoat-hair,and can give a special touch, asifembraced by the soft bristle. With the ambition to produce appropriate brushes for varying needs, craftsmen are studying in pursuit of ideal bristles day after day.

Brush production (of so-called "western brushes") commenced in Japan around the 7th year of the Meiji Era (1874). At the time, brushes made in France were used as product examples. In the 10th year of the Meiji Era (1877), the First National Industrial Exhibition was held at Ueno Park, with a display of western-style brushes being very well-received. Following on, craftsmen who had traditionally made Japanese brushes began to get involved in the manufacture of western brushes. Production started off with horse hair being used for bristles, oak being used for timber, and bristle holes being made using hand gimlets.

In Meiji 21 (1888), Japan's first brush manufacturing company was established by Matsumoto Jutaro (1844-1914), who was at the time a director of the Dai Hyakusanju Bank (the National 130th Bank). Due to numerous improvements, what resulted was a penetration of brushes into society in much the same way as can be witnessed today. The brush manufacturing industry developed focusing on Tokyo and Osaka. As new machinery was introduced to industries, it came to pass that there were a great variety of brushes used for industrial purposes in workplaces. Moreover, as Japanese home life became increasingly westernized, demand for household brushes increased. Accordingly, in locations such as Wakayama Prefecture, brush manufacturing companies introduced large-capacity machinery and mass production commenced. Later on, in factories in Osaka and Wakayama, even greater industrialization steps were taken. In Tokyo by contrast, a city that had started out with many businesses engaged in producing industrial-purpose brushes, highly-durable brushes whose bristles were hand-inserted were developed.

Because hand-inserted bristles in such brushes run together in that they are all pulled down by an internal metal wire called a "pulling string," they are more robust than bristles in machine-made brushes because with machine-made brushes bristles are directly inserted into each individual hole (and they are not secured by a "pulling string"). It is for this reason that Tokyo's brush manufacturers continue the traditional practice of inserting brush bristles by hand.