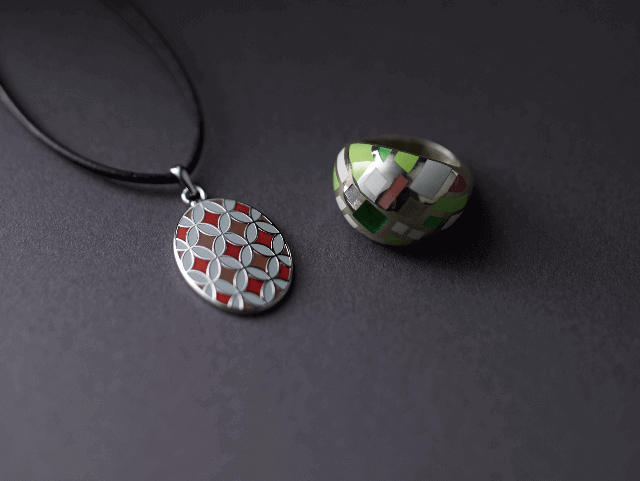 A technique of praising the national heroes for your casual adornments.
Shippo-yaki (cloisonne ware) is a type of handicrafts produced by glazing copper base with color glass powder enamel at a high temperature, and coloring. From the 17th to 19th century, the technique of Shippo-shi (shippo master) attached to Bakufu (shogunate government) was never allowed to be taken out. In the latter half of the 19th century, the government introduced Western technique to make badges, and since then Shippo-yaki has developed as Tokyo Shippo. Its clear color separation and colorful patterns are highly acclaimed, and used widely for school badges and other badges. While the cloisonne ware manufacturing, using the enamel of powdered glass, is inactivenowadays abroad, this is unique to Japan. Tokyo Shippo craftsmen select only glass materials because it is difficult for other materials to get beautiful finishing texture and transparency. In repeated glazing process per color, they polish the surface to create patterns. Skilful selections of transparent and opaque colors give a depth to the surface, and completed products give matted effects to the gloss. Its various applications include tiepins, cuff links, pierced earrings, pendants, and necklaces. It is also possible to manufacture a tailor-made Shippo having the motif of Ukiyoe.

It is said that during the early Edo Period, Hirata Hikoshiro (1591-1646) (also known as Hirata Donin) learned the art of cloisonne enamelware (shippo) from a Korean visitor to Japan, and that he subsequently applied colors to the concave surfaces of such pieces. Hirata was the founder of the craft of Tokyo Shippo, and he created famous works as a master craftsman while working in the service of the Tokugawa Shogunate. A beautiful tsuba (sword guard) is one of his most well-known pieces. Successive generations of the Hirata family resided in Edo while guarding their secret shippo techniques until the early Meiji Period.

When the Fifth International Exposition was held in Paris in the third year of the Keio Era (1868), the Shogunate dispatched a delegation to represent Japan and assert the country's influence abroad. During the event, delegation members from the Satsuma Domain (modern Kagoshima Prefecture) had an honorary medal created called "the Order of Satsuma". This decoration was modeled after the French Legion of Honour. It was subsequently presented to Napoleon III and it received high praise. This act raised the awareness of honorary decorations, which led the Council of the Left, the predecessor of the new Meiji Government's Chamber of Elders, to discuss the establishment of a Japanese honors system. In the sixth year of the Meiji Era (1873), the Chamber of Elders requested that a mint produce medals for such an honors system; however, the mint workers lacked experience in enamelware production techniques (shippo). This led the government to ask the well-known Hirata family who had worked for the Edo Shogunate for assistance. A prototype award was completed by Hirata Haruyuki and this eventually became the medal bestowed along with the award of the Order of the Rising Sun.

Currently, the Tokyo Shippo Industry Association creates items in various categories using shippo production techniques. Such categories include both women's and men's decorative accessories, automobile emblems, golf markers, school and company badges, along with items for a vast range of other applications.