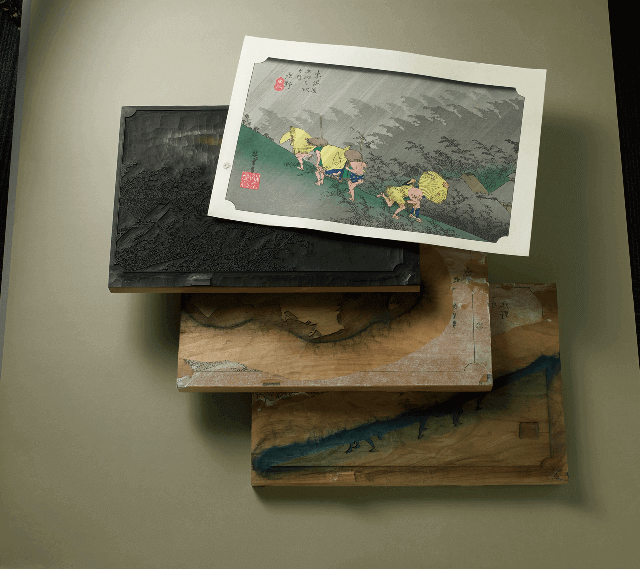 Express it more vividly than reality.
Woodblock print technique in Japan, has been growing for about 1200 years, and developed itself into Ukiyoe-hanga (Ukiyoe woodblock print) in the 17th century. Ukiyoe was widely accepted among ordinary people as one of typical popular cultures of the Edo period through Edo Moku-hanga (woodblock prints)technique, in which the pictures of famous painters, including Katsushika Hokusai and Utagawa Hiroshige, were engraved on woodcuts, and they were printed on paper. Ukiyoe is popular as a symbol of Japonisme abroad, and due to this, many cheap machine print editions are circulated. However, it is only Edo Moku-hanga technique that can create true Ukiyoe and convey the Ukiyoe’s true appeal. Production processes are executed by Horishi (carvers) and Surishi (printers) in division of labor, and the highest-grade Washi, called Echizen-kizu-hoshoshi, is used. Multicolor print is possible for more than hundred colors, and a Horishi carves appropriate number of woodcuts according to the number of colors. Paints give different impressions when looked at and printed on Washi. That is why a Surishi checks the Washi texture that varies according to temperature and humidity, and prints different colors in layers. The true charms of Ukiyoe are reproduced in our time, and are depicting the realistic feeling more vividly than reality with subtle shades, created by the skilled craftsmen’s color sense and the power adjustment of a Baren (rubbing pad).

The Moku-Hanga (woodblock print) has an especially long history in Japan. Among the artifacts of the Shosoin Treasure House in Nara Prefecture, there is a picture of foreign origin that depicts such printing processes being employed to print designs on clothing approximately 1,200 years ago.

Furthermore, a woodblock print known as Hyakumanto Darani ("One Million Pagodas and Dharani Prayers") was also produced at around the same time.

Woodblock printing first achieved general acceptance when the nation entered the Edo Period (1603-1868), as Hishikawa Moronobu (1631-1694) began to produce ukiyo-e prints. At around the same time, the separation of production skills into those of the artist, the wood carver and the printer also occurred.

Initially only simple prints were produced (works printed from a single woodblock using black ink only). Later on, a method was devised for using vermilion in order to create color prints called tan-e. The use of more complex colors became established as time passed. From around the Tempo Era (1716-1735), beautiful hand-painted pictures called urushi-e (lacquer pictures) and beni-e (rouge-red pictures) began to be sold in Edo's markets.

Around the end of the Kanpo Era (1741-1743), a method of printing two-tone pictures in red and green was developed. Then, in the second year of the Meiwa Period (1765), Suzuki Harunobu (1725-1770) developed nishiki-e (brocade pictures). This represented a high-water mark for woodblock printing, no-longer was it a case of printing in just two or three colors. Rather, polychrome printing in 10 or more colors had arrived on the scene.

Woodblock printing techniques then approached completion as artists such as Kitagawa Utamaro (1753-1806) and Sharaku (details unknown) created prints that were both graphic and offered elaborate expressionism. Moreover, at the end of the Edo Period, the landscapes of artists such as Katsushika Hokusai (1760-1849) and Utagawa Hiroshige (1797-1858) demonstrated thoroughly the colorful nature of woodblock prints.

Ukiyo-e hanga (ukiyo-e prints) represent a form of artistic expressionism in which an artist, a woodblock carver and a printer come together to work as one. The artist draws the original drawing on a thin piece of washi (traditional Japanese paper). Using a carver's knife, the carver then carves the drawing that has been affixed to a woodblock (usually cherry wood). The carver repeats this process for each color to be printed. The work is then completed by the efforts of the printer who sets the paper to the inked woodblock and then uses a baren to apply pressure to it.

Please note that modern creative hanga prints in which a single person completes all production processes are not considered to be part of the traditional Moku-Hanga (woodblock print) craft.