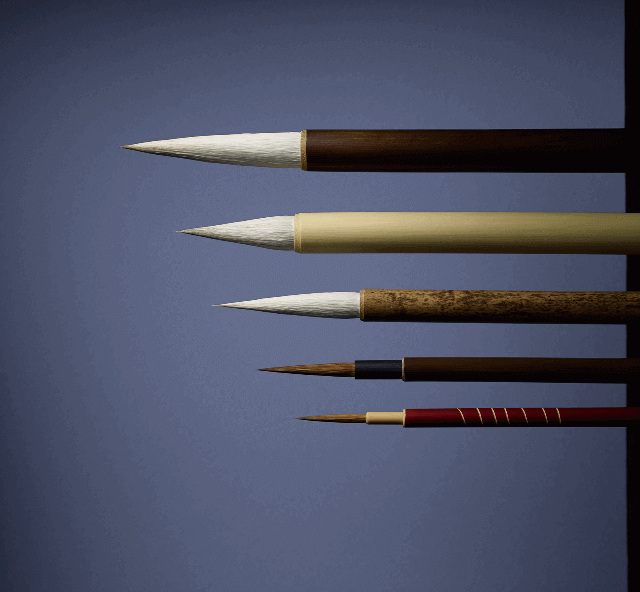 A comfortable writing touch supporting the city of the highest literacy level in the world.
From the 17th to 19th century, Edo Fude (handmade calligraphy brushes) developed as a learning and arts became popular among ordinary people in Japan. Most of them were manufactured in a tailor-made method, and famous calligraphers and painters love Edo Fude for demands of precise technique to adjust bristles in units of mm. It is not rare that the orders come from China or Korea, which are brush producing countries. Its bristles are made of animal hair of goats, horses, raccoon dogs and others because they can hold Japanese ink or allow paintings to the optimum extent. Different kind of hair are selected according to user’s handwriting and brushstrokes as well as applications. The making is robust and no bristle goes off. The bristles wear out evenly according to the brushstrokes, and it has a good hand touch. They can retain Japanese ink well to create special shades and blurs, supporting artists Eindividuality. Brush manufacturing involves nearly 30 processes, but craftsmen give importance to a careful combing with a metal comb. Through the combing process, crooked or broken hair are eliminated to complete a brush that has only good bristles. A tooth-loosing comb is a medal for a craftsman: this symbolizes the time and energy taken for the completion of a piece of brush.

Concerning the "calligraphy brush," one of the "Four Treasures of Study" within the Chinese classical canon, in the Nihon Shoki (The Chronicles of Japan) it is recorded that in March of the 18th year of the reign of the Empress Suiko (610); "the methods of making paper and ink were brought about" by the Buddhist priest Damjing. This reference indicates that Damjing was a pioneer figure with respect to the arrival in Japan of writing implements in the form of calligraphy brushes, ink and ink stones.

Since then, there have been numerous advances and improvements made in production technologies as calligraphy brushes (and the written word that accompanied them) became key implements in Japan's cultural and traditional development, with many different types of brush produced for different purposes.

Around the middle of the Edo Period, along with the rise to prominence of the commercial class, Edo witnessed a dramatic increase in the number of "temple schools". In that the general population also began to write, calligraphy brushes came to be widely used among the masses. Furthermore, a number of classic Edo Fude (handmade calligraphy brushes) were born around this time as production technologies employed by craftsmen developed even further. The dominant production method in Edo was called nerimazeho (literally "the mixing method"), and its processes were established by Hosoi Kotaku (1658-1736) in the Genroku Era (1688-1704). This method of manufacture went on to spread quickly due to the new national education system that was promulgated in the fifth year of the Meiji Era (1872).

Due to the combined calamities of the Great Kanto Earthquake (1923) and the Pacific War (1941-1945) many calligraphy brush craftsmen left Tokyo. However, those who were left focused both on the production of high-end calligraphy brushes, and on working to keep the relevant technologies and techniques alive.

Goat hair, horse hair, pig hair, raccoon dog hair, weasel hair and cat hair are but some of the materials used to make the tips of calligraphy brushes. In many cases the hair of goats native to China is used, with the hair grown below the nape of the neck in the vicinity of the upper forequarters being considered the best quality and thus highly prized. When making a calligraphy brush, in forming the tip which is said to represent the most important part, a metal comb is used to comb through the hair strands and align them accordingly, with strands without proper tips as well as those that are incorrectly oriented being removed. Shaping is the process of forming the brush tip, and advanced skills are required to ensure balanced spacing between the hairs and to also achieve an elegant shape. Nerimaze is the process of taking strands of different lengths and mixing them evenly. This process plays a major role in determining the final quality of the brush tip. Shintate is formation of the final shape of the tip using a ring-shaped implement. The craftsman feels the tip by hand to check its firmness and resilience, etc. The volume of hair used in the brush tip may be adjusted accordingly in response to how the tip feels.