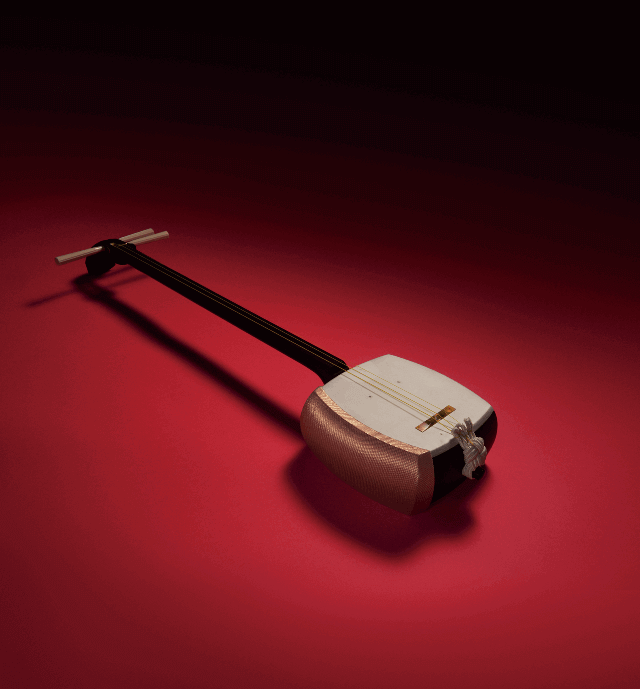 The tone is created by the ensemble made of a player and a craftsman.
Shamisen (three-stringed musical instrument) is a Japanese traditional musical instrument having over 400 years of history, and classified mainly into three types according to its applications and sizes. These include Hosozao (slim neck) type, typically used for Nagauta (literally a long song), possibly an original type, Chuzao (medium neck) type, typically used for Minyo (folk song) and Jiuta (country songs of Kyoto and Osaka regions) played with Koto (thirteen-stringed musical instrument), and Futozao (thick neck) type,used for Tsugaru-jamisen (Tsugaru-shamisen) and Gidayu (a dramatic or narrative vocal style) traditions: the neck is important for tone in anyways. While Shamisen neck is manufactured as division of labor in the Kansai region, only one craftsman is engaged from the neck manufacturing up to finishing for Tokyo Shamisen. This is in order to face each player and to manufacture the best-suiting Shamisen for every player. The highest-grade material for the neck is red sandalwood from India, and its hard wooden quality creates a good sound. However, considerable skills are necessary to create an ideal sound on the hard neck. A craftsman selects appropriate materials after understanding the player’s ability and manufactures a specific piece of Shamisen that needs repair but can be used for a lifetime, considering the best way for the player to obtain an ideal sound. Their tailor-made finishing is highly trusted from players, and they are now active in making beginner’s Shamisen at a reasonable price by repairing and reproducing old ones.

It is believed that the first shamisen examples appearing in mainland Japan were landed at the Port of Sakaino after being traded from the Ryukyus. This event occurred during the Eiroku Era (1558-1570) as the Muromachi Period (1337-1573) drew to a close.

At around that time, when players of the biwa (the Japanese lute) played snake-skin shamisen in accompaniment to kouta (ballads) and dances, they encountered the problem of snake skins tearing. After trying a number of different skins as possible replacements for snake skin, these musicians decided to use cat skin.

Thus came about the development of a unique Japanese shamisen that was strummed using the pick of the biwa.

During the Edo Period (1603-1868) at around the time of the Kanei Era (1624-1643), master shamisen craftsmen such as Kanda Harumitsu and Ishimura Omi began to appear on the scene. The appearance of such craftsmen contributed to the development of musical styles such as nagauta (epic Kabuki songs), gidayu (puppet theater recitations), icchubushi (dramatic recitations accompanied by shamisen), tokiwatsu (a kabuki narrative), kiyomotobushi and shinnaibushi (narrative pieces). These styles represent the basis of the modern shamisen musical repertoire. The manufacturing of shamisen also flourished at this time.

When a shamisen string is plucked, it leaves behind a distinctive sound (resonance) called a sawari. The musical effect of the sawari has linkages to the ethnic identity of the Japanese.

In that Japanese people tend to prefer intermediate colors rather than primary ones, it also seems that they prefer complex sounds that contain overtones rather than simple ones. Traditional materials used in the neck of shamisen include (Indian) redwood, oak, rosewood and mulberry, while cat and dog skin is also used to cover the sound hole of the instrument.