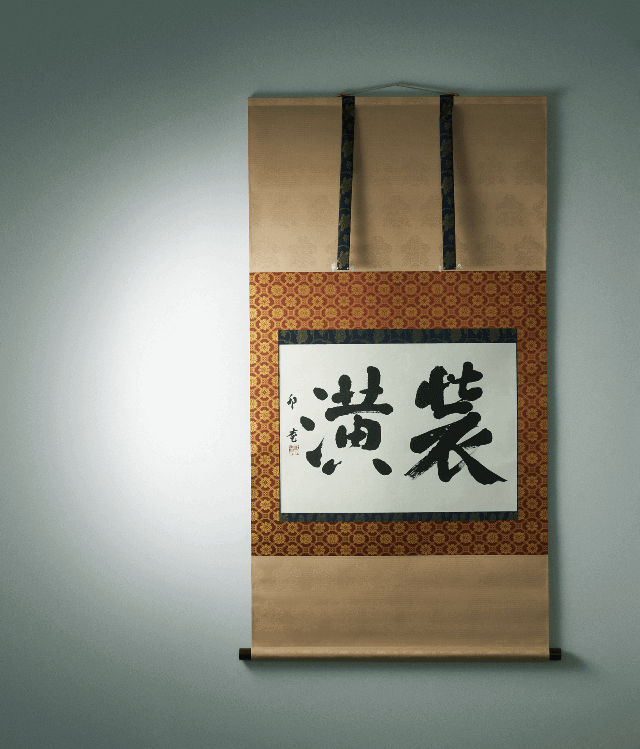 The reason Japanese paintings as old as several hundred years remain beautiful tile today.
Paintings and calligraphic works of several hundred years back remain beautiful even now because Honshi (paintings and calligraphic works) themselves and their edges have been reinforced and repaired with Hyogu (scroll mountings) using fabrics and washi (Japanese paper). After accepting an order from a calligrapher or painter, a Hyogu-shi (picture framer) intuitively makes a plan for combination of colors and patterns. Kireji fabric is a key factor to enhance the atmosphere of the work but a wrong choice will destroy it. A craftsman determines the quality and coloring for the fabric through several interactions with clients about their taste or lifestyle. In a backing process to prevent the degradation of Honshi, special Washi preserved for 5 to 10 years for gentle softening is pasted on the work. Of course, each work is unique and no failure is allowed. Craftsmen use the word “Nige (excuse) Efor any negligences in invisible parts and hate them, and they never allow others to touch their tools which are the most important things after their life. Such craftsmen’s dignity is firm, and through their life they place importance to having whole knowledge of Japanese paintings, calligraphy, printing, tea and others. Recently, they accepted the works with predetermined frame combination and the works sent from abroad, but they never loose the belief of taking care of interactions, to enhance the work, and to increase the preservation of properties.

Through agencies such as the Tang Missions, the Hyogu (scroll mounting) craft said to have been born during China's Tang Dynasty (618-907), arrived on Japanese shores approximately 1,000 years ago. Over time, this craft has evolved along with lifestyle and architectural changes in Japan. It has become something unique to the nation via both its refinement, and via the deep involvement with the flourishing of the tea ceremony which spanned across the Muromachi, Azuchi-Momoyama and Edo Periods (1333-1868).

The technological underpinnings of the Hyogu craft were initially developed in Kyoto, a city in which many shrines and temples congregated. It might be assumed that this was because the city generated great demand for scroll mountings that were capable of displaying Buddhist scriptures and religious pictures.

Initially, such craftsmen were generally referred to as kyoji (picture framers). However, the content of their work evolved and became more diversified with the passage of time. By the Edo Period (1603-1868), in that such craftsmen were handling kakejiku (hanging scroll),byobu (folding screen) and fusuma (sliding door) tasks, there were no longer distinctions between those who were still referred to as kyoji (picture framers) and those who were considered hyogushi (scroll mounters).

With the construction of daimyo residences in Edo during the Genroku Era (1688-1704), many craftsmen indentured to the daimyo also settled themselves in the city. With the flowering of culture among the townspeople, the Edo Hyogu industry flourished as both calligraphy and art became pastimes that the general public began to appreciate.

A reverse of fortunes was experienced as demand for Hyogu declined with the coming of the Meiji Era (1868-1912). This development was in line with wider trends that sought to discard traditions in favor of westernization and modernization. While demand for the Hyogu craft was increased during the Taisho (1912-1926) and pre-war Showa Eras, the industry again experienced great difficulty after the Second World War. Currently, we are carving out a new path for ourselves.

Although the materials used in Hyogu such as Japanese paper, fabric, water and paste, seem to be very simple, it takes many years of training to expertly use the different types of paper and brushes. In this respect, Hyogu is referred to "as an art resulting from water and brushes."

In that very few names are listed in the records as masters of Hyogu, it can be understood that such craftsmen prefer to ply their trade away from the spotlight.