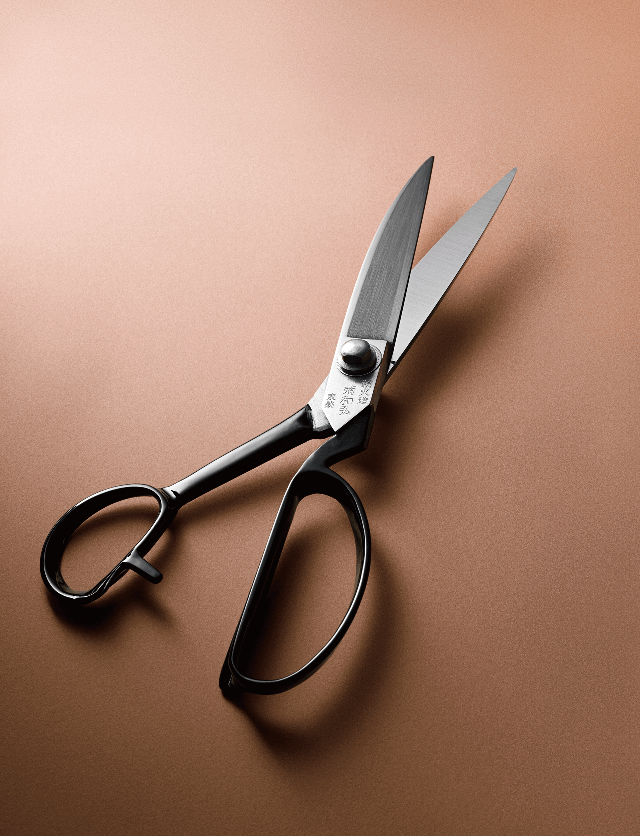 In this country, even scissors are hardened in the same manner as Japanese swords.
Tokyo Uchihamono (hand-forged blades)has its roots in Japanese sword-making tradition. After 1871, when possession of Japanese swords was prohibited by law, many swordsmiths were forced to be makers of cutting tools for both professional and personal use. The techniques used to manufacture the Tokyo Uchihamono products are those originally developed by traditional swordsmiths and the craftsmen use only the best grade of Yasuki-hagane (steel from Yasuki area), a Japan-specific type of steel. The quality of the Tokyo Uchihamono products, lasting sharpness and good resistance against edge damage, owes much to Yasuki-hagane, whose production process eliminates foreign matter to the maximum degree possible. Kitchen knives and scissors are manufactured through the processes of heating the Jigane (base iron) and steel to 1,000˚C and then beating out the shape with a metal hammer to produce beautiful lines and brilliant sheen. Whereas European cutting tools need to have a certain amount of force applied to make them cut, Tokyo Uchihamono kitchen knives slice items without any need for force. One characteristic of these knives is exemplified by Japanese-style swords that do not cut under force but, rather, with only a light touch. Tokyo Uchihamono’s scissors are so accurate that they will securely cut every fiber. They will never tire users. Tokyo Uchihamono are products that will last a lifetime because their effective lives are said to be 100 years.

According to the Nihon Shoki, one of the oldest and most important chronicles of Japanese history, blacksmithing was first carried out in Japan in 583, when smiths were invited to Japan from the Korean Silla Kingdom during the reign of the Emperor Bidatsu (the 30th emperor of Japan, reigned 572-585). The Japanese supposedly learned how to forge steel from these visiting smiths.

Swordsmiths appeared as the samurai class rose to power. These craftsmen steadily improved their skills, eventually devising a method of forming blades with soft iron and attaching steel along the cutting edges. This created the soft yet sharp-cutting blades that are unique to Japan.

After Tokugawa Ieyasu established the Edo Shogunate in 1603, merchants moved to Edo from all over Japan. The names of metal casters and forging experts were also recorded among the lists of craftsmen who served the Shogunate.

The Edokanoko, one of the most informative general guidebooks to the city of the Edo Period, has a description about blacksmithing in relation to blades. It lists craftsmen who offered pointed carving knives (deba-bocho) that were formed through hammering. The guidebook tells us that swordsmiths also produced razors, kitchen knives and other bladed implements in addition to their main trade in swords.

Japan enjoyed a period of peace from the mid-Edo Period onward. During this time, an increasing number of swordsmiths changed their production focus, utilizing their smithing techniques to create the implements and blades needed for everyday life. In other words, many of them transformed themselves into town blacksmiths.

Following the fall of the Edo Shogunate and the Sword Abolishment Act of 1871, which prohibited ordinary people from carrying weapons, most of the remaining swordsmiths were forced to start making commercial and kitchen implements. They responded to the nation's Westernization (known as bunmei kaika, "the civilization and enlightenment movement") by applying their inherited skills to the manufacture of Western-style blades.