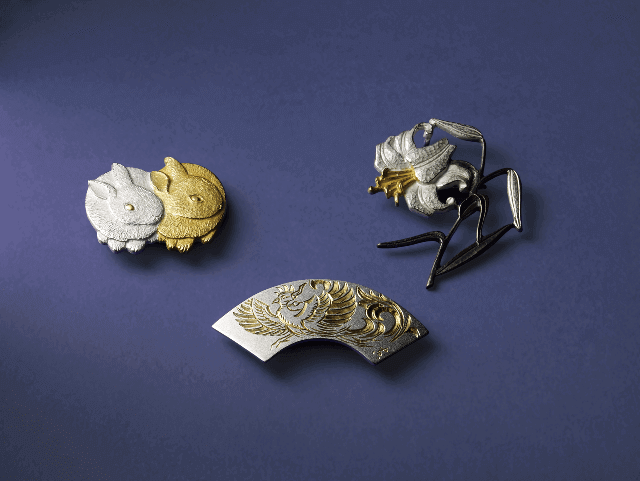 Using metals on the canvas to draw a Japanese painting
Chokin (metalchasing) techniques, used on Samurai swords and armor, underwent evolution in the 18th century due to the Katakiri-chokoku (half-cut carving) technique which was created to reproduce the brush strokes of Japanese paintings in carved metal form. This history led to Chokin becoming popular for use in everyday articles, including Kiseru (Japanese smoking pipes) and Netsuke (miniature sculptures attached to the ends of cords hanging from pouches), and the technique was highly acclaimed at the 1885 Metalworking International Exposition in Nurnberg, Germany. Katakiri-chokoku is a Japan-specific technique that uses just one side of a graver. Oblique carving against metal creates a difference between a deep-carved line and shallow-carved line. This difference creates shadings in carved lines, thus reproducing the blurred effect of the brushes used for Japanese paintings. The compositions, having wide margins and a limited number of colors emulate Japanese paintings. Different art forms, including Japanese paintings and metal carving, are harmonized in a completed work to realize the blend of different types of beauty sought by the craftsmen. The metal texture changes considerably over time and many people use the products for extended periods; for example, rings, pendants, obidome (ornament worn over an obi), metal oil lighters, and so on. The craftsmen treasure the relationships with clients and they are prepared to repair the products throughout their lifetimes.

Metal crafts, and more specifically chokin (metal chasing) techniques have been in Japan since the late Kofun Period (the late seventh century). Such skills were introduced by craftsmen who had travelled to the country.

If remaining examples of early work in the form of personal ornaments such as crown-caps, decorative shoes and horse tack are considered, it seems apparent that in the late Kofun Period, the basic metal craft techniques of hairline and fretwork engraving were well established in Japan.

With the warrior classes rising to prominence as the Heian Period (794-1185) drew to a close, there were more examples of chokin being used to decorate swords, armor and metal accoutrements. Goto Yujo (1440-1512) was a leading exponent of the chokin craft during the Muromachi Period (1337-1573). With a style of metal chasing called "Iebori," which paid homage to both existing social conventions and acted as a legacy that successor generations appreciated, Goto is referred to as the father of a revival in chokin fortunes.

In concert with the sustained tranquility of the Edo Period (1603-1868), swords were transformed from practical weapons to items of appreciation for which there was competitiveness with respect to amusing aspects of their design. During this period, many chokin craftsmen appeared on the scene, and it was an age that saw the perfecting of techniques necessary to realize engraved products both small and precise.

Later in the Edo Period, Yokoya Somin (1670-1733), a craftsman of aristocratic lineage, developed his katakiri engraving technique. Using a cold chisel, this technique made it possible for chokin to simulate ink-brush painting on metal workpieces. In that Yokoya personally preferred to associate his revolutionary style with Edo's townspeople rather than with the military classes, this new technique came to be known as "Machibori" (literally "town engraving") as opposed to the "Iebori" style of chokin that was associated with Kyoto.

Use of "Machibori" was not limited to the decoration of swords; it was also used to decorate smoking pipes and netsuke. Thus, it gave birth to new fashion trends. However, chokin demand declined during the Meiji Restoration with the Sword Abolishment Act that prohibited ordinary people from carrying weapons.

A transformation occurred with demand for products suited to living in a new age; however, their production relied on traditional techniques. Concurrently, there existed a government policy of industrialization. Thus, when examples of the chokin craft were displayed at the Nuremberg Metalwork Exhibition of 1885, they were very well received.

Metal processing techniques can be divided in chukin (casting), tankin (hammering) and chokin (chasing) skills. Of these skills, chokin can also be described as an overall process for the finishing of metal workpieces. The modern craft of Tokyo Chokin is derived from the "Machibori" technique born in the Edo Period. This technique involves the careful engraving of a wide range of patterns using a single cold chisel. Moreover, refined and tasteful Tokyo Chokin products are created by matching such techniques with metal staining methods that are distinctive.