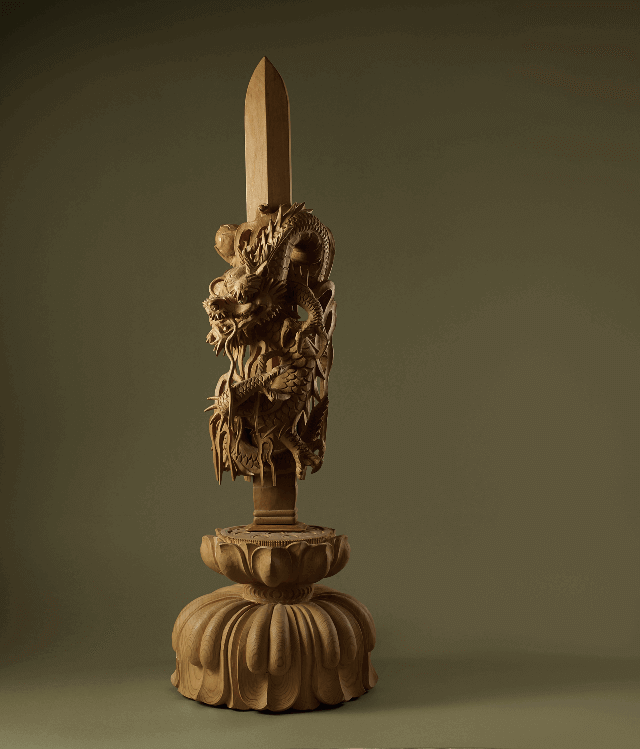 Not carving, but extracting the image residing in the wood.
Dragons launch themselves skyward and lions are full of movement. Japanese wood sculpture features rich expressions and precise carving and, down through the ages, its exponents have produced major historical art works such as the World Heritage Site Yomei-mon Gate of the Nikko Toshogu Shrine and others. While traditional Butsuzo (image of Buddha) sculptors use knives and chisels, Edo Moku-Chokoku (wood sculpture) craftsmen do not use any kind of knife. This is because their roots are in the carpentry trade. Edo Moku-Chokoku techniques had their origins in architectural embellishments on pillars and Ranma (an openwork screen above the sliding partitions between two rooms) for shrines and temples and subsequently developed and were polished through the creation of decorative sculptures on Dashi (floats) and Mikoshi (portable shrines) for festivals. A craftsman chooses a few hundred chisels, according to the application, with which to depict, three dimensionally, tree branches and twigs at the back, birds in front, and intersections of character images. In Edo Moku-Chokoku, craftsmen regard filing work as amateurish and they use chisel cutting to bring out the sheen of wooden materials. The craftsmen place importance on elegant finishing rather than fine workmanship: e.g. sharpening dragons’ noses and paying attention to eyes and mouths for human figures. These wood sculptures, chiseled out of robust timber will endure for even 100 to 200 years and they evoke a solemnity that naturally invites adoration from viewers.

The history of sculpture is very old. According to one theory, sculpting as a craft commenced along with the arrival of Buddhism in Japan in around the 6th century.

From the Heian through the Kamakura Periods (approx. 794-1333), there were a lot of Buddhist statues carved. Over time there was also a transformation from delicate and beautiful works admired by the aristocracy, to a flourishing of works that embodied the perceived heroism and ethos of the military classes.

On entering the Muromachi Period (1336-1573), the aesthetic simplicity of Zen Buddhism which did not require statuesque iconography came to the forefront. Therefore, the demand for statue sculptures was dwarfed by the demand for sculptures of decorative taste that could be applied to the pillars and transoms of shrines and temples. This field of application saw rapid development. Furthermore, during the Azuchi-Momoyama and early Edo Periods, a master carpenter called Hidari Jingoro rose to prominence.

Concerning architectural sculpting, in that it was a trade originally engaged in by carpenters, during the Edo Period from among the ranks of the master carpenters there was born a new class of craftsman called miyachoshi (literally "palace sculptors"). These artisans specialized in the carving of decorative reliefs.

Concerning buildings resplendent with sculpture in the vicinity of old Edo, the Yomei-mon Gate of Toshogu Shrine in Nikko is but one example.

During the Meiji Era (1868-1912), as western buildings began to appear in Japan, craftsmen who had previously been involved in the production of Buddhist iconography and the decoration of shrines and temples began to turn their attention to the carving of decorations in the western style. In the Diet Building constructed in the early Showa Era, there is a masterpiece of sculpting that was executed by a team of 300 craftsmen over period of more than three years.

Various timber species including Zelkova, Cypress, Cherry and Camphor, etc., are used in sculpting. Furthermore, the quality of finished work is as much dependent on preliminary sketches as on the carving skills of the craftsman. If the intent is to sculpt work that is in good taste, then in addition to an understanding of pictures and writing, the craftsman also requires knowledge of a wide range of other topics such as the Japanese art of the tea ceremony and flower arrangement.