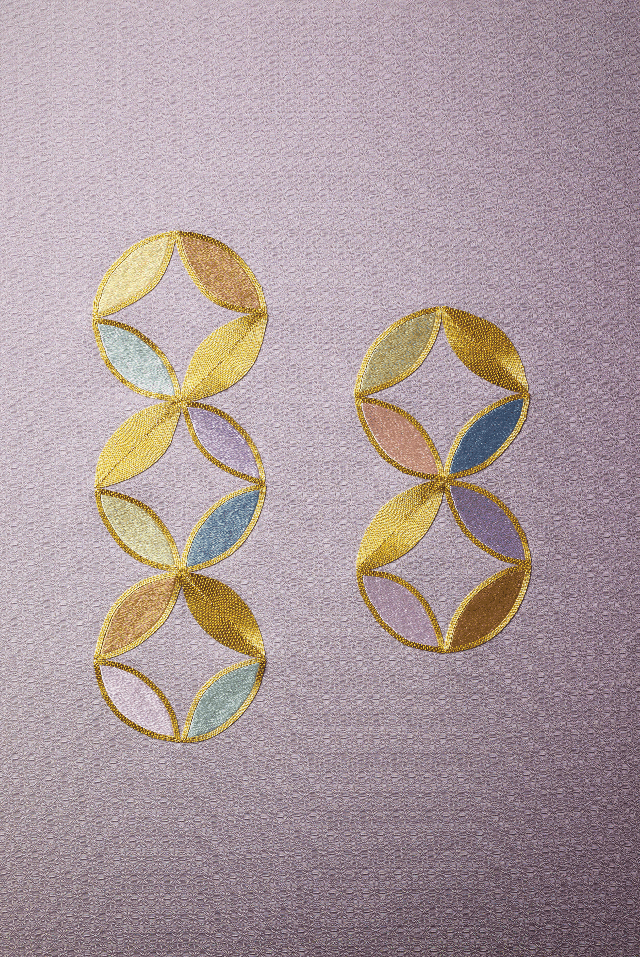 A dazzling number of stitches create this fineness and brilliance.
Japanese embroidery has a 1,400-year history. Following the introduction of Buddhism to Japan, embroidery started through emulating that in the Buddhist images, and embroidered Kimono became popular with the merchant class from the 17th century. Then, Edo Shisyu became one of the typical Japanese embroidery traditions, along with the Kyoto and Kaga styles. Production starts with taking an order from a client. Next, designs and colors are determined. There are almost 20 variants of red thread, alone, so it requires a craftsman who is well versed in Japanese traditional colors to apply his/ her color sense. Some of the many stitching methods are Japan-specific techniques, including Komanui (stitching using a koma, or special reel) to wind the threads onto a reel and stitching with a Toji-ito (binding thread). Craftsmen challenge new creations applying traditional techniques to express his/her individuality as an artist in detail. Created out of stitches that can number up to tens of thousands, the miniature-like works emit silk-specific lights, a special quality that would never be seen in products made of cotton. Silk threads change their brightness as you view from various angles and Edo Shisyu items are highly valued as works for aesthetic appreciation that are different from paintings and pictures.

Shishu embroidery commenced during the Asuka Period (592-710). Buddhism had been introduced from China at around this time, and along with religious iconography such as gilt statues, there were a number of Shubutsu (Buddhist tapestries) created. These items are believed to represent the roots of the Shishu tradition in Japan. The oldest remaining example of such works is the "Tenjukoku Mandara Shucho" (kept at the Chugu-ji Temple in Nara Prefecture). This is a tapestry said to have been commissioned by Empress Suiko (554-628), and subsequently embroidered by the ladies of her court to commemorate the death of Prince Shotoku (572-622).

As court life evolved further in the Heian Period (approx. 794-1185), Shishu techniques started to appear in the ceremonial court clothing of both men and women. This led to the development of competition at court based on flamboyant fashion.

Further Shishu evolution occurred in the Azuchi-Momoyama Period (approx. 1573-1603). Whereas previously the mainstream was patterns achieved by needlework alone, many Shishu works from this period combined embroidery with dyed textiles for decorative effect.

Against a backcloth of peace and tranquility in the middle Edo Period, townspeople's social status increased concurrent to their economic power. Some of their number tired of a perceived simplicity of decoration, and this led to the creation of dazzling kimono that combined numerous dyeing and Shishu techniques.

Because such kimono began to attract exorbitant prices, the Shogunate introduced sumptuary laws and sought to strengthen its prosecution of offenders. However, prosperity in the Shishu trade continued along with a flourishing of Edo culture.

At the time, Shishu craftsmen carried the titles of nuihakushi (embroidery masters) or nuimonoshi (masters of embroidered goods). Furthermore, there were distinct styles associated with the Kyoto, Kaga and Edo regions of Japan. Concerning needlework placement in Edo Shishu, designs came to be laid out so that their interspacing could be enjoyed.

Shishu craftsmen consider both the thickness and ply of threads. Using processes that resemble the drawing up of precision plans, they focus their attention on preparing threads and working in numerous different colors.

Behind the magnificent finished works of Shishu, there is a mundane task involving great perseverance. Armed with just a needle and thread, the craftsman's job is all about how much life they can breathe into the underlying textiles; with the intricate needlework patterns taking shape literally one stitch at a time.