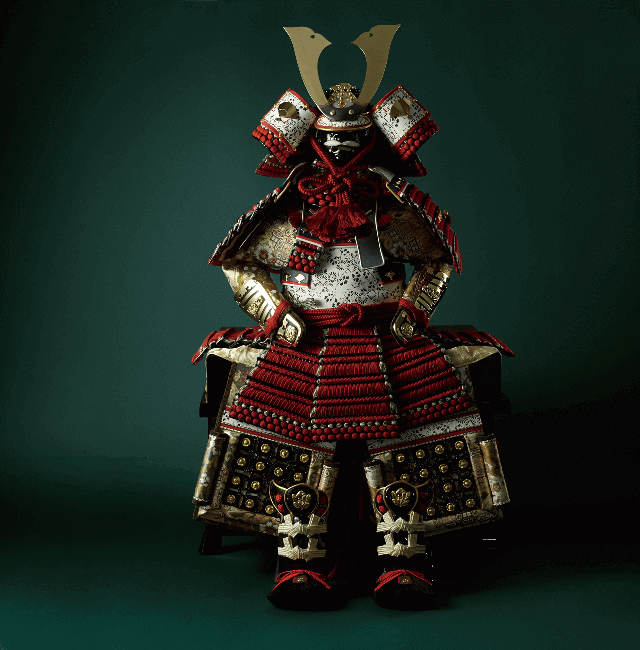 Love tokens for children transformed into robust armor.
In the 8th through 12th centuries, when military commanders introduced mounted cavalry, a type of Katchu (warrior armor) called Ō-yoroi (large armor) appeared. The design of Edo Katchu is based on that Ō-yoroi. Primarily, Katchu is a protector, but the term also refers to a costume intended for Japan-specific beauty achieved through a combination of metalwork, Urushi work, and dyed leather. In the 17th through 19th centuries, notable as a period of more than 200 years in which there were no major domestic wars, parents began displaying Ō-yoroi, a symbol of strength, on the occasion of the Boys’ Festival, to pray for the health and success of their male children. Subsequently, the custom of displaying Boys’ May Festival dolls in armor and helmets spread among the general population too. Whereas Katchu from Kyoto has gorgeous decorations, Edo Katchu reproduces Ō-yoroi based on careful background research and features profound designs with simplicity and strength. Manually producing a true replica of Katchu and its minute parts requires more than 5,000 processes. Hoping that children will appreciate their parents’ love for them, craftsmen pour their energy into making Katchu of robust, long-lasting, and distinctive quality. Thus, their spirit will be inherited by future generations as a result of parental love.

The Boys' Day Festival is one of long-established traditions, it being an occasion that celebrates the healthy growth of male children.

According to existing historical records, in the "Shoku Nihongi," an imperially-commissioned history written during the Nara Period (710-794), there is reference to a Boys' Day Festival being celebrated in the court of the Emperor Shomu in the year 733.

In those days, it is said that a ceremony called Umayumi was conducted to sweep away evil. Prayers were also offered for the peace and safety of the Emperor's realm.

Around the middle of the Edo Period (1603-1868), in celebrating the hope that male children would develop into strong and healthy individuals, it became popular to place dolls adorned in military dress in the home. Overtime, this tradition changed into the unique practice of simply displaying Katchu (sets of warrior armor) in the home.