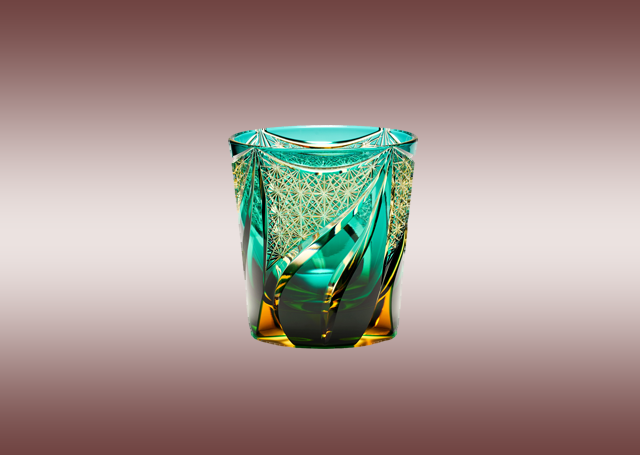 On colored glass, a path of light is engraved.
Edo Kiriko (cut glassware), born in the 19th century, is a craft that drew from a European cut-glass technique. Another Kiriko product tradition is found in the Satsuma (currently Kagoshima Prefecture) area outside of Edo. While Satsuma Kiriko lost the patronage of those in power at that time and the tradition was temporarily suspended, Edo Kiriko maintained its popularity as everyday products having simple beauty for ordinary people and its tradition has been handed down to today’s generation. Including the Nanako pattern, which looks like a series of fish eggs in a reflected light, a range of some 20 traditional patterns inspire gaiety at the modern dining table. Craftsmen are keen to manufacture new products using original cuts in addition to inherited traditional patterns. Whereas Satsuma Kiriko uses a shading technique to cut Irokise (colored) glass 2 mm to 3 mm thick, Edo Kiriko creates sharpness and clear shininess, created by fine carving of colored glass of a little less than 1 mm thick. Kiriko is popular because it reflects the light like a kaleidoscope when seen from above and Kiriko’s simple beauty, created by designs on the transparent glass, is once again being highly acclaimed. Craftsmen are manufacturing vessels of various shapes, for sake, beer, and wine, and are exploring durable designs that are also convenient for everyday use.

Kiriko is a form of glass cutting in which grinders and whetstones are applied to the surface of glassware, and a number of different cutting (or grinding) techniques are employed in order to manufacture products.

The originator of the traditional craft of Edo Kiriko (cut glassware) was Kagaya Kyubei, who ran a glassware store in Edo's Odenmacho (in the vicinity of modern Nihonbashi).

Kyubei is said to have learned his craft in Osaka, which at one stage was a leading center of glassware production in Japan. After completion of his apprenticeship, he returned to Edo and opened a glassware store in the city, where items such as eye glasses, thermometers and hydrometers were produced.

As Japan moved from the Taisho Era to the Showa Era, manufacturing evolved so quickly that "cut glass" came to be synonymous with "artistic glass," with the industry reaching its pre-war zenith around 1940.

Concerning Satsuma Kiriko (cut glassware produced in Kyushu), which is as equally loved as Edo Kiriko, it resulted from the Satsuma Domain (who ruled over modern Kagoshima Prefecture) inviting the Edo glassware manufacturer, Yotsumoto Kamejiro, to establish glassware production in the domain. This industry grew quickly as the government of Satsuma fully supported its development.