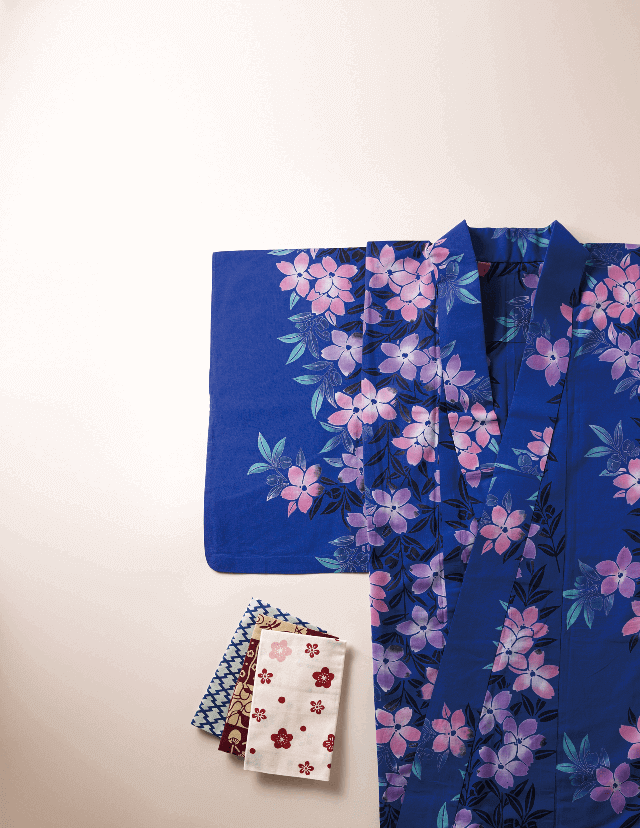 Only a few Japanese people are aware of a true Yukata.
Yukata (indigo-dyed summer kimono) developed as a type of Kimono to be primarily worn after bathing. It is not formal wear but requires elegance and a sense of humor. This is because Edo people have an Iki (smart) character. Yukata became room wear/nightwear in the 19th century and has been used for summer festivals, including En-nichi (festival days), other festive occasions, and fireworks displays. Its thin cotton fabric breathes well, and is less likely to stick to sweaty skin. Yukata gives off a cool-looking impression as a common feature of Japanese summertime. Although the current mainstream is Yukata of print dyeing type, a craftsman uses dye containers of a sprinkling can type, called Yakan (kettles), to pour dyes onto the fabricin the original traditional dyeing process. This is a Japan- specific dyeing method called Chusen. When multiple Yakan filled with different colored dyes are used for simultaneous pouring, beautiful shadings can be created, but this technique calls for a high degree of skill. Its controlled colors, based on indigo and deep blue, represent “Iki Eand produce manual-dyed specific textures that emulate the fading brought about by many years of use. Currently, applying Chusen (dye pouring) technique, same as Yukata dyeing, the Tokyo Honzome Yukata craftsmen are also manufacturing Tenugui (hand towels), which are proving popular with overseas visitors as handy souvenirs.

As a term, "yukata" ("bathing clothing") was featured in the Engishiki ("The Legal Codes of the Engi Era"), a book written in the early Heian Period (around the end of the 8th century). More recently, in 1713 (the third year of the Shotoku Era), "yukata" were discussed in the Wakan Sansai Zue ("The Illustrated Sino-Japanese Encyclopedia"). In this work, there were numerous references to the wearing of unlined kimono during and after bathing.

At around the same time, yokudo (bath houses) were being built by a number of temples as attachments to their facilities.

When using these baths, there were strict rules against the exposure of skin. Thus, bathers made sure to wear simple coverings. These coverings came to be known as yukatabira or meii.

Initially, much of the material used to make yukatabira was white raw silk. However, over time it seems that patterned materials came into use. Moreover, yukatabira came to be known by other names including yugu ("a bathing tool"), minugui ("a cover up"), yumaki ("a bathing wrap") and koshimaki ("a waist wrap").

There were also changes to how such clothing was worn. By the middle of the Edo Period, "yukata" were something worn after rather than during bathing.

At the end of the Shogunate, there were numerous woodblock prints of beauties dressed in "yukata". The imagery of people wearing "yukata" while at public bathhouses became somewhat of a cultural staple.

The development of bathhouses coupled with the "character of the Edokko" (the self-identity of those people born and bred in Edo), contributed to the quality of "yukata" improving over time.

Another factor that cannot be forgotten is the impact of the theater on the "yukata" culture.

In the famous Kabuki play called "Sukeroku" (one of the 18 plays associated with the Ichikawa Danjuro line of actors), the character Kampera Mombei appears on the stage partially-dressed (without an obi belt) in a "yukata" made from white Moka cotton dyed with indigo (the same cotton now being produced in Moka City, Tochigi Prefecture).

In modern times, "yukata" are associated with fairs, festivals, evening breezes, and fireworks, etc., all these elements being imagery that is an integral part of Japanese summer traditions.

Furthermore, it is said that "yukata" only became a normal summer dress item once Japan had entered the Meiji Era (1868-1912).