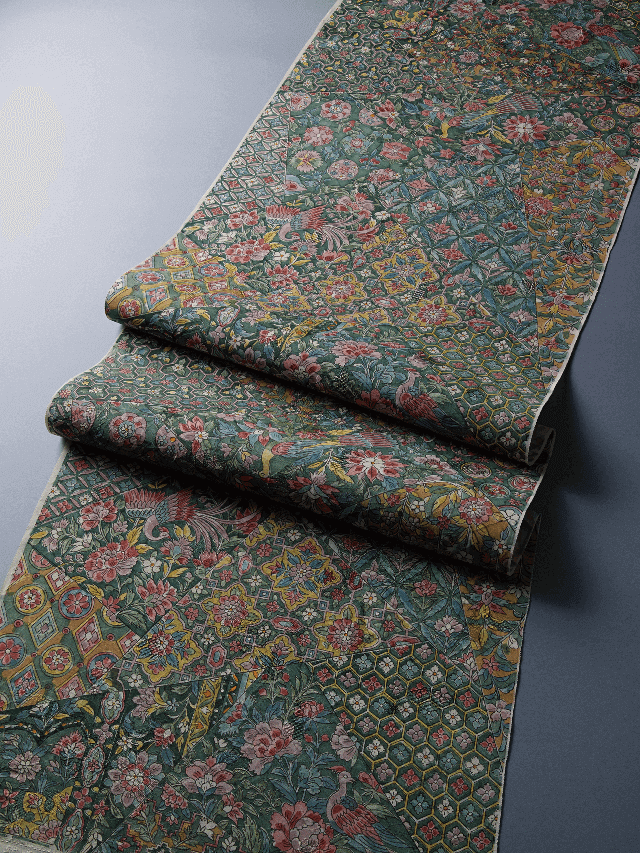 This is Edo ’s interpretation of colorful fabrics from India.
Sarasa (calico) pattern, originating in India more than 3,000 years ago, is cotton dyed with five colors (dark red, indigo, green, yellow, and brown). It became popular and developed in Asia and Europe, reflecting local histories and cultures. Sarasa is said to have come to Japan in the 14th through 16th centuries. Edo Sarasa (printed silk calico) is the result of special development, applying the traditional Japanese Katazome (stencil dyeing) dyeing method to create complex patterns with multiple colors. By repeating the Katazome process 20 times for less complex patterns or 90 times for more intricate patterns, gradations became possible using undertones of similar colors. Shading and gradation are created through the dye craftsman’s skill in controlling the brushes to rub dyes into the material. Different from foreign printed cotton which use mainly primary colors to create multi-color patterns, Edo Sarasa features staid, deep colors. Edo Sarasa is venturing into designing new clothing accessories, including stoles, and interior furnishing items such as partitions. The blend of exotic patterns with the colors of Edo’s aesthetic offers buyers a beauty that transcends cultural boundaries.

Sarasa originated more than 3,000 years ago in India. The techniques involved in its production are said to have spread west to Europe and east to China. They were introduced to Thailand and Indonesia, subsequently crossing the seas to arrive in Japan.

“Sarasa” is a common terminology used throughout the world.

It is said that Sarasa arrived in Japan during the Muromachi Period (1336-1573), with products from India and Europe being brought by foreign merchant vessels from Portugal, Spain and Holland. The Japanese referred to these ships as Nanbansen and Komosen.

The bulk of clothing in Japan at the time was made from silk or hemp; people were both surprised and pleased with the qualities of cotton, it being a textile they had previously known nothing about.

The attraction of Sarasa is the colorful patterns that can be created by dyeing it in five different tones (dark reds, indigo blues, greens, yellows and browns).

In that the exoticism of such countries differs from the Japanese traditions associated with homegrown textiles such as those produced using some-komon (fine-patterned dyeing) and yuzen (painted dyeing) techniques, people may have a somewhat exotic image of Sarasa that reflects the natural traits of its origin countries.

It is said that Edo Sarasa was born in the second half of the Edo Period. The water of Tokyo, including that of the Kanda River, is considered to be a relatively “hard water” (with a high mineral content). Thus, the iron content present in the water produces ongoing chemical reactions until dyeing processes are completed. The outcome of this is a tendency towards sober hues being produced.

It is through this that the austere elegance unique to Edo Sarasa is created, and the colors realized tend to offer a sense of wabi-sabi (a sense of “simplicity and refinement”).

Presently, only Tokyo boasts a reasonable population of Sarasa producers.