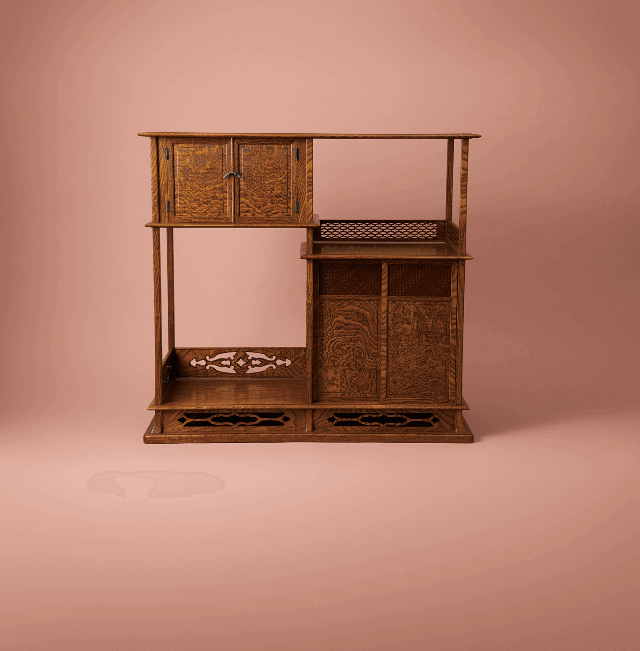 No nails. No problem for Edo.
Sashimono (wood joinery) signifies furniture and other wooden joinery items assembled without nails, using specially processed wood joints and combined boards. Edo Sashimono was developed in the 17th through 19th centuries in line with economic and cultural development. The technique was introduced in cabinetwork for Samurai families and wealthy merchants, and it developed as Rien Sashimono (cabinetwork, including a greenroom dresser, for Kabuki actors), then spread into the public marketplace. Edo Sashimono features the grainy texture of natural materials, such as mulberry and paulownia wood, and uses only minimal metal fittings. This cabinetwork is simply designed with no frills, giving it lasting value, and it is still popular to this day, notwithstanding the diversity of lifestyles, thanks to the fruits of skills polished in tailor-made production. Responding to various size and application demands, craftsmen tailor-make products that preserve Edo Sashimono’s fineness and appeal. Behind the high-level skills involved in identifying bending and degradation of the wood brought about by humidity changes, stand the craftsmen’s dedication to eliminating any flaws, even in unseen places and their determination that their products will serve faithfully for decades. Finally, Edo Sashimono will have depth as years go by. This is a special kind of craft that will develop over decades with careful use.

"Sashimono" is a term derived from the traditional practice of using a woodwork ruler (or a "monosashi" in Japanese) to carefully measure timber materials in order to create box-shaped items of furniture, such being equipped with precise-fitting lids and drawers.

In Kyoto, the "sashimono" tradition enjoys a very long history, it being possible to trace the associated joinery skills back to the court culture of the Heian Period (approx. 794-1185). In those days, such furniture was made by hand by carpenters. The "sashimono" skills of dedicated "sashimonoshi" (specialized furniture joiners) evolved from the Muromachi Period (1337-1573) onwards, as furniture such as shelving, chests of drawers and desks all saw greater usage in samurai households. Furthermore, in accordance with the development of the tea-ceremony culture, it is said there was an increased demand for box-shaped items of furniture such as "sashimono". Thus, the craft of the "sashimonoshi" diverged from the carpentry profession along with a number of other artisan trades including "toshoji" (craftsmen of doors and shoji screens), "kudenshimiyashi" (craftsmen specializing in temple and shrine work) and "himonoshi" or "magemonoshi" (craftsmen of bentwood products).

In Kyoto, "sashimono" developed into furniture that was used within the imperial court and among the aristocracy, as well as being used within the context of the tea ceremony. It was also loved as a genre whose designs touched on matters of elegance and simplicity.

By contrast, Edo Sashimono saw service with samurai families such as those of the Shogun and of the various daimyo (the feudal lords). Furthermore, much "sashimono" was made for the merchant class that rose from the middle of the Edo Period (1603-1868), and also for the use of Edo's Kabuki actors (in the form of theatrical chests).

The true spirit of craftsmen can be felt in Edo Sashimono in a number of ways. Firstly, there is the use of timbers with beautiful grains such as Mulberry, Zelkova and Paulownia, etc. Secondly, there is the skillful use of techniques even in locations that cannot be seen. Thirdly, there is an almost total absence of nails in the construction of "sashimono".

Behind the "sashimono" skills summarized as the arts of cutting, planing, sealing and carving, it is possible to feel the uniqueness of the craftsmen.

In that timber, derived from a living organism is what is used in the production of Edo Sashimono, the variety of unique adjectives such as "hardness," "sweetness," "dullness," "subtleness," "well-rounded," and "raw," etc., that could be used to describe the timber might be said to tell a story in themselves.