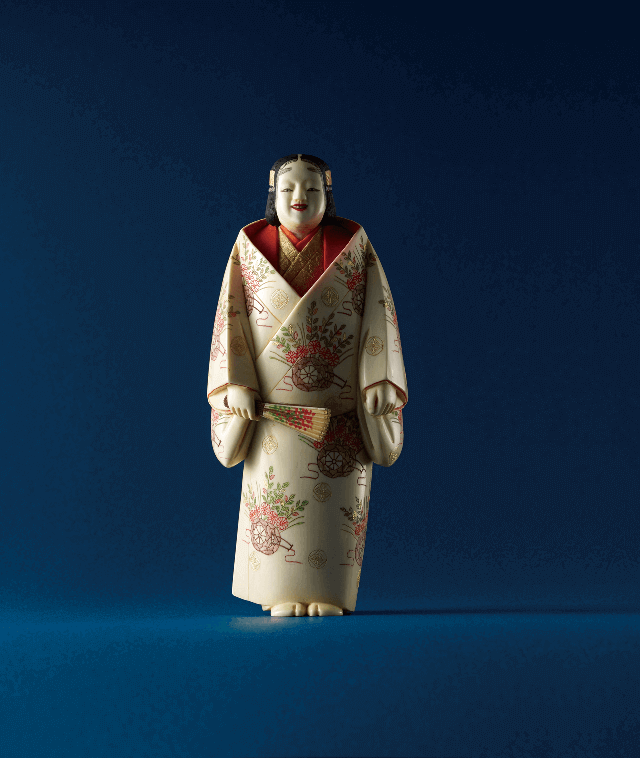 One and only warmth that every form of art loves and enjoys.
A method for engraving ivory is said to have arrived in Japan from China in the 8th century, and ivory was used to make teaspoons, hair decorations, and Netsuke (miniature carving attached to the end of a cord hanging from a pouch) in the 17th through 19th centuries. Today, international trade ofivory is strictly regulated under the Convention on International Trade in Endangered Species of Wild Fauna and Flora (Washington Convention) and none has been imported into Japan since 2009. Only ivory bearing a registration tag can be processed into craft works. Due to this material’s scarcity, different degrees of hardness and softness, and unique annual rings, craftsmen have become adept in saving even small fragments. The soft texture and luster peculiar to ivory are attractive to many people, and ivory is used for personal seals as well as for ornaments/Netsuke engraved with motifs of traditional Noh dramas, temples and shrines. It is also used in relation to Japanese musical instruments  Efor string bridges and finger plectrums for the Koto, and for Shamisen pegs, bridges, and plectrums  Eand it is acclaimed for its characteristic flexible ability to capture the forcefrom strings and metal parts with no slip due to hand’s sweat. Many instrumentalists prefer ivory due to its flexibility and comfort in performance, but hard ivory that can be used for Japanese musical instruments is very limited. Despite this situation, ivory is still highly prized because demand for such high-quality natural materials never ceases.

In that ivory possesses a smooth texture, beautiful luster, the subtleness of vein patterning and ideal hardness; it offers everything that is required of a superior material for traditional crafts. As such, since ancient times it has been highly-prized in both Eastern and Western cultures.

In Ancient Egypt, ivory created opulent furniture and personal ornaments; in Ancient Greece and Rome, it was the material from which countless deity statues were fashioned. Ivory also has a rich usage tradition in China. With large volumes imported by China from India and Thailand during the thriving commerce of the Sui and Tang Dynasties, ivory was a material that came to be loved by the ruling classes, it being employed by the Chinese to create decorative furniture among other forms.

Based on ivory pieces held by the Shoso-in (the treasure house of the Todai-ji Temple in Nara Prefecture), it can be understood that Chinese carving techniques were conveyed to Japan during the Nara Period (710-794). Within the Shoso-in collection, there is a rule (a scepter) used in religious ceremonies that features intricate ivory carvings. There are also Biwa (Japanese lute) plectrums, and stones for the board game of go, etc., all of which have been fashioned from ivory.

Furthermore, in that the Shoso-in also possesses samples of unprocessed ivory (in its natural state), it is possible to appreciate that processing and the creation of ivory pieces was also conducted in Japan in ancient times.

To explain what ivory is, it represents the grown tusks of elephants, with large examples being three to four meters in length, and sometimes weighing between 40 to 60 kilograms. The tusks of female elephants tend to be narrow and long, while the tusks of males are both strong and thick.

It is said that ivory product manufacture in Japan commenced with spoons and other accoutrements (such as container covers used in the tea ceremony). During the middle of the Edo Period (1603-1868), ivory pieces came to be widely used, with items such as netsuke, hair ornaments and samisen plectrums, etc., coming into use. This resulted in ivory being loved by people of many different classes from the samurai to the townsfolk of Edo.