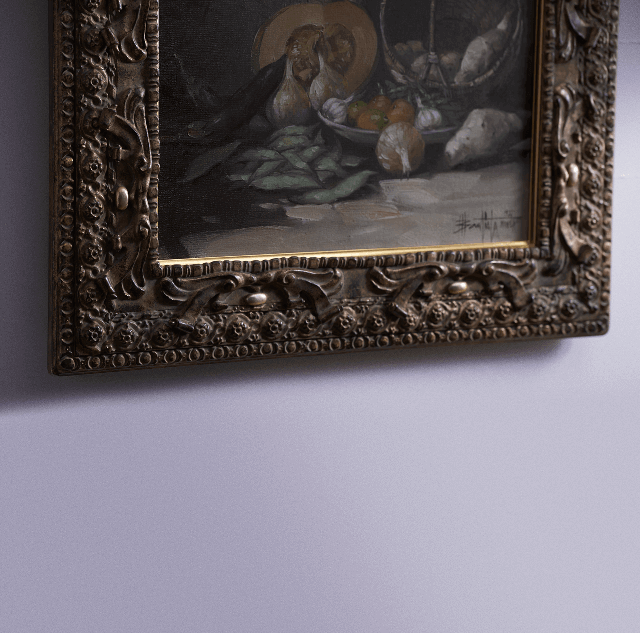 Painters, art dealers and art collectors: Our customers are giving the largest number of requests in the world.
Painters regard picture frames as part of own work and take pride in the completeness that they provide. Whereas art dealers look to frames to add extra value to paintings, art collectors are interested in the integration of paintings with interior spaces. That is why there is no standard design for picture frames; no ready-made picture frame can meet a special or specific demand. The craftsmen of Tokyo Gakubuchi (picture frames) listen to the requests of painters and art dealers, and create the best designs, sometimes based on consultation with the client. In the picture frame manufacturing process that developed in the 19th century with the popularization of Western art, Sashimono (cabinetwork), sculpture, and coating craftsmen were separately involved. In Tokyo Gakubuchi, these independent skills are brought together and applied in a continuous operation to produce frames that reflect various demands. Clients trust the craftsmen’s sense of beauty and their experience, including a method for matching the painting colors to the display space, in addition to a technique for creating a grainy texture through coating. Although a particular design may be copied for picture frames intended for printmaking, the craftsman places importance on his/her manual work in order to make each picture frame special.

Since ancient times in Japan there has been a love affair with folding-screen pictures used to adorn living spaces.

Among the ancient folding-screens still in existence, a prime example is the "Torige Ryujo no Byobu" (a six-panel folding screen of women dressed in the Tang style). It is held by the Shoso-in (the treasure house of the Todai-ji Temple in Nara). In the administration of Ashikaga Yoshimasa (the 8th Shogun of the Ashikaga Shogunate) during the Muromachi Period (approx. 1337-1573), splendid folding-screens became widespread. These works were set against backgrounds of gold. During the blossoming of culture in the Azuchi-Momoyama Period under Oda Nobunaga and Toyotomi Hideyoshi (approx. 1573-1603), Kano Eitoku produced the magnificent "Karajishi" (the "Guardian Lions") folding screen. Among other works, the Genroku Era (1688-1704) of the Edo Period saw the production of the wonderful "Fujin Raijin-zu" ("Picture of Wind and Thunder Gods") by Tawaraya Sotatsu.

Full-scale production of picture frames in Japan started in the Meiji Era (1868-1912) as the nation sought to adopt western (oil) painting techniques. In response to instructions received from artists, cabinetmakers made wooden picture frames, sculptors of Buddhist statues engraved decorations on them, and lacquer craftsmen added a finish.

Specialized picture frame craftsman appeared in Japan in the 25th Year of the Meiji Era (1892). In that year, a lacquer craftsman called Nagao Kenkichi established Japan’s first picture frame factory on a small scale in Shibaatagocho (in modern Minato Ward) at the behest of the oil painter Yamamoto Hosui who had returned from France.

In the picture framing business, “gakuso” is a term used to describe the placing of a picture in a frame (it means to literally “dress a picture”). This expression embodies the spirit of a framer in their desire to create frames that bring out the heart and soul of pictures painted by artists.