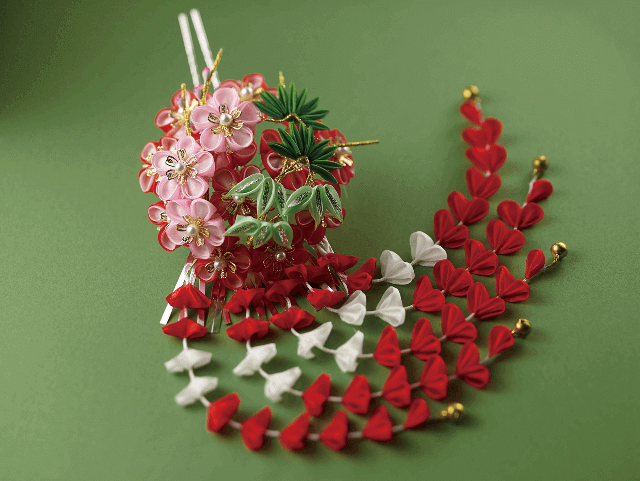 Tiny pieces of silk can create a cherished treasure for someone.
Kanzashi is a type of accessory that can beautifully decorates Kimono clad women’s hair in festivals and rites of passage such as Shogatsu (New Year), Shichigosan (celebrations on a child’s third, fifth and seventh years of growth) and Seijin-shiki (coming of age celebration). Among these accessories, Edo TsumamiKanzashi (ornamental hairpin), flower and bird shapes crafted using silk fabrics called Habutae (type of silk), has been regularly used over a long time as the preferred hair ornament for Kimono. The name, Edo TsumamiKanzashi, comes from the process of taking square-cut Habutae with tweezers and folding it minutely. Using various folding techniques, including the Marutsumami (round picking) method to give a soft impression and Kakutsumami (angle picking) to achieve a strong image, the craftsman creates motifs of chrysanthemum and plum flowers, as well as butterflies and Chinese phoenixes. The finished products convey a profound feeling that could never be achieved with imitation flowers. The resulting flowers and birds look alive and very vibrant and dynamic. Today, craftsmen are taking up the challenge of creating various new designs based on the concept that the best products are those that sell well because they meet the demands of the contemporary market. Even a non-Japanese student of Edo TsumamiKanzashi techniques has become popular in Los Angeles, U.S.A.Attracting many orders from overseas wholesalers, its beautiful designswin wide attraction.

The origins of ornamental hairpins are said to lie with the tradition of "passing something through the hair." The basis of this tradition was the ancient belief that narrow rods with pointy tips held magical powers. Thus, people felt evil might be warded off if a narrow hairpin was passed through the hair.

However, the ornamental hairpins of more modern times are not just derived from something “passed through the hair.” Rather, it is said the Edo tradition of Tsumami-Kanzashi (ornamental hairpins) commenced in the early Edo Period due to a particular technique for making ornamental flower petals arriving in Edo from Kyoto.

With this technique, lightweight silk is cut into small squares and then shaped by tweezers using traditional pinching techniques. By arranging these pieces using a “pinch craft” process, flowers and birds are created.

In the middle Edo Period, combs, ornaments and hair decorations called “kusudama” (a ball-shaped decoration of flowers created from tsumami) were all made in the city. As these articles were beautiful in color and reasonable in price, it is said they were favored as souvenirs of Edo.

In the collection of the “Byakkotai-Kinenkan” (The White Tiger Force Museum*) in Aizuwakamatsu City, Fukushima Prefecture; there is a tsumami kusudama ornamental hairpin believed to have been taken back to the Aizu Domain from Edo as a souvenir.

In the contemporaneous commentary written on the customs of the Edo Period called "Morisada manko" (literally "an encyclopedia of folkways and other affairs"), there is the following reference made to women's hair fashions:

“In the Bunsei Era (1818-1830), among women wearing their hair in the Shimada style, there was the practice of gathering it at the back and decorating the hair with crepe scraps, in white, blues, reds and purples that had been collected together to make ornaments that were shaped as chrysanthemums and cranes.”

Moreover, among models featured in “fujinzu” (depictions of women) created by woodblock print artists of the late Edo to early Meiji Periods, it appears the hair ornaments shown are in the Tsumami-Kanzashi style.

In contemporary times, Tokyo is the main manufacturing area of Tsumami-Kanzashi ornamental hairpins, these products further enhancing the beauty of the feminine form when dressed in kimono on occasions such as the New Year, “shichigosan” (the seven-five-three festival), “jusanmairi” (a temple visit made by 13-year-old children to give thanks for their traditional coming of age), “seijinshiki” (a ceremony that celebrates minors obtaining their age of majority), and weddings.

* The “Byakkotai-Kinenkan” is a museum that commemorates Aizu Domain warriors of the Boshin War (1868 -1869).