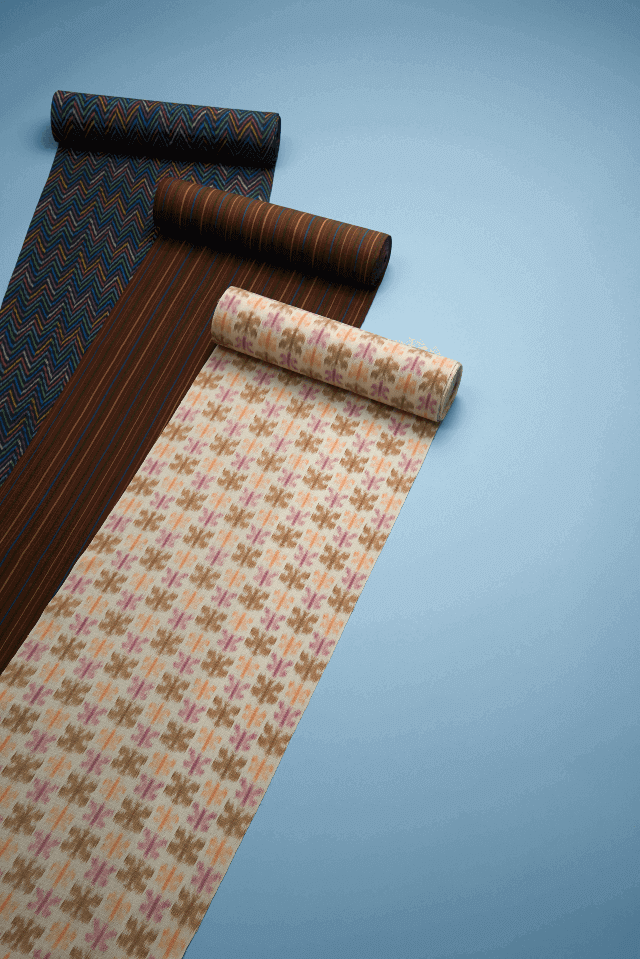 Relaxing “noise Eadded by human hands to geometrical patterns.
Hachioji, located in the southwest of Tokyo City, was once known as “the city of mulberry Eand it flourished as a major center of sericulture, silk making and fabric production. Tama Ori (Tama woven fabric) is a generic name for five kinds of fabric that have their origins in Hachioji textiles and the comprehensive techniques that came out of the production center for a wide range of silk textiles. This variety of colors and patterns is a legacy of the most advanced mode of the age. “Zurashi E(shifting) is a high-level technique for creating calculated transitions of geometrical Kasuri (splashed) designs, shifting 1,200 yarns of dyed raw silk to weave the patterns. The natural texture of handwork comes from manipulation of a loom, using both feet and hands for each process, and fine tuning of the weaving process. Tokyo’s “Iki (refinement) Efeeling is realized through the simple touch of spun silk thread, and uncomplicated patterns and colors. This fabric, which enjoys universal appeal for even daily use over long periods, is rare and highpriced due to the manual work involved throughout the manufacturing process. However, it is now being used in ties, hats, and stoles, enabling many to enjoy the touch and patterns of Tama Ori.

These words are from a poem sung during the Tensho Era (1573-1592). They describe the bustling activity of the castle town marketplace at Hachioji. In Hachioji, which was known as the "City of Mulberries," sericulture (the raising of silkworms) and textile manufacturing have both long flourished; and these factors have contributed to the continued weaving of various textiles in the area.

Although the five different fabric types - omeshi-ori, tsumugi-ori, fuutsu-ori, kawaritsuzure-ori and mojiri-ori - are referred to collectively as Tama Ori today, they can all be considered the culmination of developments during Hachioji's long textiles history.

Leading weaving industries developed in locations with clean water, with famous production areas including the Kamo River in Kyoto and the Watarase River in Kiryu and Ashikaga. Hachioji, the home of Tama Ori weaving, is no exception to this rule. The city is surrounded by the Aki and Asa Rivers, which have headwaters within the borders of the former Bushu (Musashi), Soshu (Sagami) and Koshu (Kai) Provinces. The history of weaving in Hachioji has close ties with the waters of these rivers.

Hachioji's markets were formerly held on the fourth and eighth day of each month. After the Tokugawa (who later became the rulers of Japan) relocated to the Kanto area, it is believed that Hachioji's Yokoyama and Yokaichi Markets began to serve as important commercial venues for the textiles that became important local products. Hachioji was situated at the borders of Bushu and Koshu Provinces, making it a strategically important location in military terms. The Kanto head magistrate's office and junior officials (Sennin Doshin) were located in the city, and Hachioji served as the protector of the western part of Edo. These developments elevated the status of Hachioji.

The Tama Ori production process is distinctive in terms of the division of labor. The singular, quiet elegance of the woven fabrics results from the separation and specialization of production processes. Such processes include textile manufacturing, preparing punched cards (jacquard cards) for guiding looms, thread dyeing, gluing, warping (preparing reels to determine the spacing and placement of longitudinal threads), preparing kasuri (the weaving in of dyed fibers to create patterns and images), print-style dyeing, thread twisting, setting of loom frameworks, and the final treatment of cloth (fine adjustments made to improve its texture).