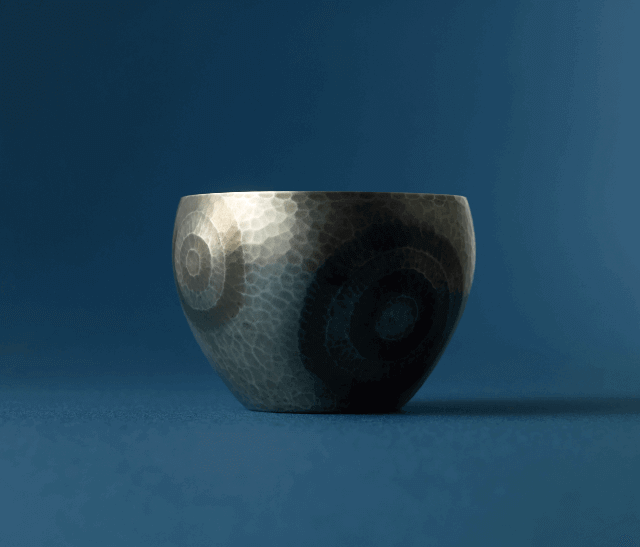 Profound brilliance of silverware from Japan, admired by the world at the Paris Expo.
In its prime, the Iwami Silver Mine was one of the two largest silver mines in the world, the other being the Cerro Rico silver mine located in Potosí, Bolivia, and Japan was then one of the world’s major silver-producing countries. Silver Silver products were already made in 916 and silver craftsmen called Shiroganeshi (silver masters) were given important posts by the Daimyo (feudal lord) families in the 17th century. The common folk also adored silverware. Japanese silverware items exhibited at the Paris Expo in 1867 won great admiration, even from Europeans, who were very knowledgeable about silver products. Of course, Japanese silverware craftsmanship has been greatly influenced by Europe and incorporates a number of world-class skills, including hammering and inlaying. Hammering is the process of hammering the ground metal into a thin sheet of about 1 mm thickness, using a metal or wooden hammer for forming, while Kashoku (decoration) is a surfacing process involving marking the patterns with a metal hammer. These highly elaborate skills are never practiced in other countries. The patterns created with metal hammers, including Tsuchime (hammered mark), Ishime (rock pattern), and Gozame (matting pattern), impart special textures and their uneven surfaces fit comfortably into users’ hands. Many will be drawn to this silverware, which includes silver goblets for use in celebrations to commemorate long life, silver teapots and silver kettles – very popular in Asian countries – all with a deep luster that does not fade, even after 100 years.

It is said fully-fledged manufacture of silverware commenced during the Muromachi Period (1336-1573) when silver mines began operation throughout the nation. Furthermore, new refining processes were acquired from European visitors to Japan.

Metal may be shaped into a myriad of forms by techniques such as hammering, heating and smelting. Such allow for the creation of thin metal plate and the softening of metal materials. Since ancient times people have fashioned weapons, utensils, religious objects and fashion accessories, etc., by leveraging the unique properties of materials such as gold, silver, bronze, tin and iron.

In ancient Egypt and China, it is said the limited quantity of silver made it more valuable than gold. At around the 5th Century in Rome, silver production expanded and silverware products became much prized possessions. In particular, silver tableware became a mainstay of the banquets held by the upper classes.

In that silverware has found great favor in Europe and North America, the wealthy feel great pride in owning magnificent table settings. There is a saying in the United Kingdom, "to be born with a silver spoon in one's mouth." This describes people fortunate enough to be born into wealthy families.

The quality of Japanese silverware first came to world attention at the Paris Exhibition held in the 3rd Year of the Keio Era (1867). With the coming of the Meiji Restoration, numerous thick-plate floral vases were manufactured in Tokyo and subsequently exported from Yokohama. The designs of such products overflowed with Japanese expressionism. After the Second World War as more foreign nationals came to Japan, demand for silverware products such as cutlery and fashion items increased, the result being that Tokyo is now a major silverware producing area. Finally, please note that "sterling silver" denotes silver whose purity is 92.5% or greater.