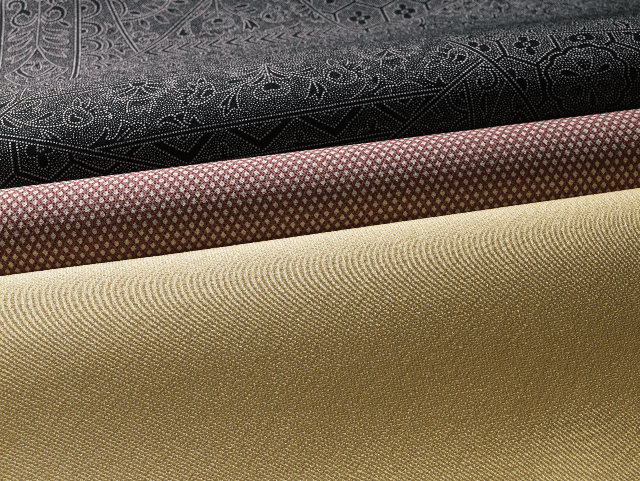 There is a texture that fascinates you twice.
Komon (fine-patterned dyeing) is a type of textile dyed with repeated minute patterns. Historically, to distinguish between hand-s (feudal domains) of daimyo-s (feudal lords) who go to Edo Castle in the 17th through mid-19th centuries, minute patterns were dyed into their garments (kamishimo or ceremonial dresses). The patterns, made with points and lines as tiny as 0.5-1 mm, as typified by Gokuzame (fine shark skin pattern), have more than 1,000 dots clearly dyed within 3 cm square. Plain-looking from a distant view, it can easily accept any Obi (belts) and expresses Iki (refinement), an aesthetic sense that avoids apparent splendor as a first impression but, when seen up close, makes the observer aware of the skilled craftsmanship. Its hand-dyeing method creates shades across the entire fabric and its highly rated technique lends depth to the surface. The white, high-quality lining, again evoking the highly rated skills of true craftsmen, ensures that the colors will not leach through, making the minute patterns prominent. Tailor-made precise matching of patterns and colors enables combination dyeing using multiple patterns and colors, as well as single-color dyeing. Tokyo Some-Komon (Tokyo fine-patterned dyeing) high-quality fabric is widely used for ties, neckerchiefs, and stoles as well as for Japanese dresses.

*1 Shigoki: Using a spatula, the entire textile is dyed by applying the Natsusennori mixture to which base-color dyes have been added.

Development of fine-patterned dyeing occurred during the early Edo Period as it became possible to dye intricate patterns upon kamishimo (a formal upper body garment worn by the samurai classes). At the time, there were mansions established in Edo by daimyo (feudal lords) from throughout Japan. Thus, there was an expanding samurai class that demanded more fine-patterned dyed products. Concurrently, daimyo in Edo also decided on family crests and such designs were then printed on articles of clothing. The techniques that originally only catered for the intricately-dyed kamishimo of samurai gained popularity from the mid-Edo Period onwards as culture flourished among townspeople and the same techniques were applied to kimono and haori (a form of short top coat). Accordingly, demand for textiles increased and business was strong.

At the start of the Meiji Era (1868-1912), due to promulgation of laws concerning hair length; and the impact of western culture, there occurred a significant decline in demand for fine-patterned dyeing among men. However, demand continued to increase with respect to the use of such textiles in women's kimono. Furthermore, around the middle of the Meiji Era, semi-formal kimono were developed for women featuring floral pattern prints. Up until and including the present, such patterns have proved popular in that they demonstrate the "decorative" aspects of women's kimono.

In the modern world, the "Tokyo Some-Komon" name is applied to products engraved in Ise and dyed in Tokyo. The engraving of designs is done using a cone tool and a small knife. Such techniques include "cone engraving," "pierced engraving," "draw engraving," and "tool engraving," etc. Furthermore, seven or eight pieces of stencil paper are overlaid at one time, and engraving then takes place in an area that is 13cm long and 40cm wide. Among such engravings, some patterns occur in a work area just three centimeters square, involving the piercing of more than 1000 holes in the stencil paper. Through such engraving techniques, amazingly intricate patterns are created.